Adding Layers to the Shards of Thimbral RPG system.

Getting ready for the next Shards of Thimbral Playtests session.
I have a few changes and additions to make based on the first two playtests, out line in these earlier posts.
http://dustpangames.blogspot.com/2013/11/live-play-test-number-1-so-it-begins.html

So I am starting to add layers to the  “Shards of Thimbral RPG.” I have what I feel is a decent enough  mechanic for the  telling of stories which I outlined it in  long winded detail here:
http://dustpangames.blogspot.com/2013/11/nitty-gritty-open-hood-game-mechanics.html


I still need to play-test the ever loving stuffing out of it, but I feel that it works and I think I can move forward with the layering of other system details.

The first detail is structure.

Each session is set up by the players looking at each others character sheets, and picking two goals from those character sheets to pursue. This is a tool that makes sure the Gm runs a game that the player’s are invested in. In testing it made a pretty big difference between game on e and game 2, in fact the difference was so profound that for me the idea was an instant keeper.

The time spent  pursuing the goals picked by the group is referred to as a “chapter.” A chapter could be a whole game session, or part of a game session, depending on how long the players and the GM want to dig into the current set of goals.

So how do you know when the chapter is over?
This is the wrinkle that drives much of the game.

If we go back to that earlier post I wrote about the impasse and the system for players rolling dice back and  gaining narrative power. On the surface it looks like the players can just go off on tangents with no way of the Gm to introduce any elements or complications at all. Mind you, I enjoy that kind of thing, because The Gm is also a player and when unexpected things happen in the fiction, everyone gets to experience them for the first time together, that’s good gravy. 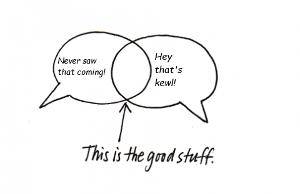 What I will introduce at the next play test is the idea of  response dice, which is a pool of narration dice available to the GM.
Details....
The pool may be of any number of D6's, the main function of which is to put a limit on the length of any one chapter. When the response die pool is exhausted the chapter is over and  the goals that group are focusing on  must change.

So OK, how are the response dice used?
At the beginning of the game the group picks the number of  response dice they want to have in play for the current chapter.  The GM rolls them all at once, in front of the players and lays them out in a line in front of the GM's position at the table.  Dice showing a value of oe should be rerolled.

Like this, only I doubt you'll roll them in order, if you do ..bully for you.

When a TEST comes up during an impasse the  Gm selects up to 5d6 from the pool to play along with the players.
Any time the GM wants to respond to something in the  players narration the Gm must dial back a die. When a die gets dialed back to a value of one  it is simply discarded.

For example: Harley is in a bad spot he  has  crashed his schooner on the surface and is being chased by several reforged through a ravine filled with towering  basalt formations. Harley is a great brawler and tough guy but he is outnumbered and things look grim. Just as Harley stops to catch his breath, a rend-forged berserk leaps from the shadows and is looking to split  Harley open with a nasty onyx ax.
Harley's player dials back a die and says, “Harley raises his pressure shotgun and  pulls the trigger.
The gm stops Harleys narration dial back on of his own dice, “Your pressure gun  lets off a rounding POP and and the shot shatters the Bezerk's ax the  gray fleshed abomination  roars as the onyx fragments rip long wounds up it's arm, but it's still coming at you!”

Harley's player is now free to dial a die back and continue his narration.
This would go on until the players decide that they have dialed the dice back enough and would like to finish the TEST.
The Gm keeps any unused dice and the game continues.

When there are no more response dice the GM and the players must wrap up the  chapter, experience is distributed and the game can either go on with a new chapter or he game can be over.

This sets us up with the chance / risk  economy detailed in the “under the hood post” that i now being kept on topic and in focus by the structure formed by Chapters using GM response dice.

I see a few benefits to this kind of system.
Players get their goals focused on and in turn get some spotlight time for their characters.
The length of chapters and or games can be easily manipulated.
Want a short game or to cover multiple chapters? Use 5D6 response dice.
Want a longer chapter or game? Use 10D6 or even more response dice.
Want to build an adventure, OSR module style? Great! Set encounters to happen only after a certain number of response dice have been spent. In this way a GM can pace an adventure however they see fit behind the scenes with out jobbing or changing the system.

I would also like to take a second to thank everyone who read and commented on my Kick-starter post from Monday. I make a real effort o try and reply to any and all comments I get if I missed on Monday I apologize, (They were prey wide spread between the Blogg and G+)
It was really great discussion and a lot of good points were brought up on both sides of that crowd sourcing fence. Enough good points were made that I will rethink the whole thing again when I am closer to self publishing Shards of Thimbral.

Lastly, to anyone who celebrates Happy Thanksgiving, enjoy the day!

So that's the system post for this week, as usual Thank you for reading
Any replies , comments, ideas, and shenanigans welcome.
Posted by Mark at 9:12:00 AM