Thoughts on Kickstarter from the smallest of fish.. 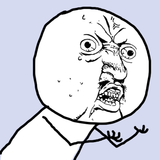 Why you no Kickstart?

Kickstarter and why I'm not going that route, the small fish view:

More than one person as told me, “Hey you should kickstart your game, that would make producing it that much easier!” I paraphrase liberally, but that's the gist.

I love kick starter. I think it is a great idea for groups and start ups who are looking for a boost. The whole Idea of “crowd-sourcing “ has revolutionized the gaming hobby and provided start up funds that have allowed companies to explore original ideas that may not have fit perfectly into other more traditional business plans.
Bravo.

With all that said KickStarter is also not built for the really little guy.
"Hold on!" you say, "The little guy is the whole point of crowdsourcing!"
I hear ya...and.. I know there have been some success stories in the past.
Here are some of the biggest ones, naturally they have big names attached to them.
http://www.cnbc.com/id/48725154
I bet if I looked around enough there are some small success stories as well, and to be honest I don't have aims to be as successful as that gang listed above.

When I look at these items however, most of them have a base of interested people already in place. Wasteland is a known property, Mike McVey is known designer, Order of the Stick had a fan base, Amanda Plamer is just plain awesome and people should know her. The only surprises are the ipod nano watch bands which it's self banks on people who dig i-anything, and the e-paper watch, Even ouya had some pretty big names behind it, apparently.

Sure there are small projects on kickstarter, I can't deny that.

My issue is one of my own scope, it's not the “I did not get funded” problem.. It's the “what if I get too funded?” problem.
My project goal is one game, one “manual” to be more exact, to be produced and sold via PDF and Print on demand. I'm giving myself two years to write, test, layout, and “do” everything I have to do to meet my goal.
If I tried to crowd-source via kickstarter for a goal of (spitballing here) three grand to cover every damn expense involved with the project. I say for each $25 or better backer I get, they get the printed copy and a PDF.. woot...

With a kickstarter I would run the risk of over extending. Kickstarter over-extension is a known thing, and a condition that once it starts can be the kiss of death. (the road through Kick-starter is strewn with the burning hulks of dead RPG's and other stuff, dead stuff. )
http://www.kickspy.com/browse/all-failed

That point doesn't really apply to these guys:
http://www.kickstarter.com/projects/1433901524/the-strange-a-tabletop-rpg-by-bruce-cordell-and-mo

However just look at that list of “unlocked” products.. yes they have 300+ thousand dollars to work with, they have also have committed themselves to XP cards, Poster maps, short stories, Players kits, bestiaries, god knows what all.
Monte Cook, Bruce Cordell, and the gang will make that happen, they are pros, it's what they do and how they do it. I'm even considering giving them my money, just because the books are so damn pretty.

My point being once a kickstarter gets rolling there is no telling where it will stop. I have seen some smaller RPG companies and individuals reputations take pretty solid hits when they started a Kickstarter and for what ever reasons could not live up to the commitments. I don't want to be on that list.
(Kairn RPG anyone? Great example, From what I understand the problems were not the creators fault, and I feel sorry about that, because I liked the project. I'm still not giving him any of my money any time soon.)

So best case:
What if the gods of the interwebistry like my little game and I get 300 backers. Now I have to do a print run to cover that. Ok so that's what the other $4500 bucks is for. I get that, but I'm also not prepared to set that up (frankly I don't have a clue, yet.) Print on demand takes care of that as long as the orders are not an all at once kind of thing.
I won't have the time to make extra material for stretch goals. I'm one guy. I have a wife, a house, a full time job, This is a hobby, not my source of income. So it would be awful hard to even attract the 120 donations I would need to meet a humble goal of three grand, let alone inspire people to give more.

Yes I love crowd sourcing and kickstarter in particular as a concept, for even semi established brands, licenses, and . However for a one man “heart-breaker” (hate that term) operation the dedication of time and the possibility of over-extension is just too risky.

And as a bonus track here is a great post on another more positive side of Kickstarter / crowd sourcing.


http://www.vorpalblonde.com/kickstarting-a-revolution/
Posted by Mark at 9:53:00 AM

Email ThisBlogThis!Share to TwitterShare to FacebookShare to Pinterest
Labels: Editorial

Poke around a bit, have a read!


Please above all else feel free to comment, exchange ideas, and questions.