For this post I think A bit about my personal relationship with the 4thEd of Dungeons and Dragons would be a great place to start, for clarity. We had at some point converted our 2edAd&D game over to third and soldiered on (lost some players in the transition). Like a lot of gamers at the time the group I game with were pretty embroiled in a 3rd Ed game when the 4th Ed dropped. My friend Jay and I were riding home after a game and had a conversation that ended in something like, “no way I am buying new books, lets just keep doing what we're doing, or why not write out one damn game.” From that conversation our game Phase abandon was born and D&D of any color was left behind for a few years. In turn we both bought the first D&D 4th Ed players book, but more as a curiosity than anything we planned on playing. We tried it once, and put it on the shelf. We had our game Phase and we were fine with that.
That's the history.

This is the now:
With our recent AD&D second edition old school revival game up and running, Jay said, “Hey while we are at it why not give this 4th edition a chance too?”

My 4th edition character is pretty straight forward , a large weapon fighter, scandalizing in great sword, called Armed Sage Oka. He is a brave good aligned warrior with middling stats and all the combat abilities that come with a first level Fourth edition fighter. So far however he feels kind of empty to me.

Here is my thought and it ties into some discussions I have had with the readers of this blog.
My vision for Oka is a sort of two handed sword wielding traveling sage. Going from town to town, offering to help solve problems and dispensing some wisdom along the way. Its a very simple sketch of an idea I have a lot of room to grow the character. Why does he travel? Where did he get his outlook on life? Who the hell is he any way?
I have to deliver this information to the GM who if he can fit it in, will give me a bit of time and space to explore the character, while doing the same for the rest of the party.

Unfortunately, unless our GM feels the need to reward you (a totally personal preference) there is no intrinsic reward in the system for being a traveling sage. The game does not care who your damn character is, it only cares that you are a first level fighter with a 16 strength, wearing scale male. (mind you he would not even wear scale mail except that the role of a fighter is to take hits and if Oka had on anything less.. Like robes, Oka would be dead already) The game could care less, who your character knows, who your character travels with, What your characters intentions are, or what the character's future plans might be.
By way of example, in our last game we saved a villager from a cave where he was held captive by some goblins. We killed some goblins we did some role play, when the villager said “There are more people down there, the goblins took seven of us!” one of the other players instantly said, “I stab the villager in the face with my spear!” Mind you we were playing on role 20 so no one say his sheet (except the GM) and no one could just shoot him a look, be we all let out a group, “You Fuckingwhaaa?”

The player logic, that his character is Neutral evil, there is no way his character is going to risk himself for this ass hat farmer, or his friends, or the party for that matter, and while he’s at it he does not want this guy going back to town and saying those guys saved me but abandoned the rest of the villagers!” so the best thing to do was leave no witnesses, hence stab him in the face. 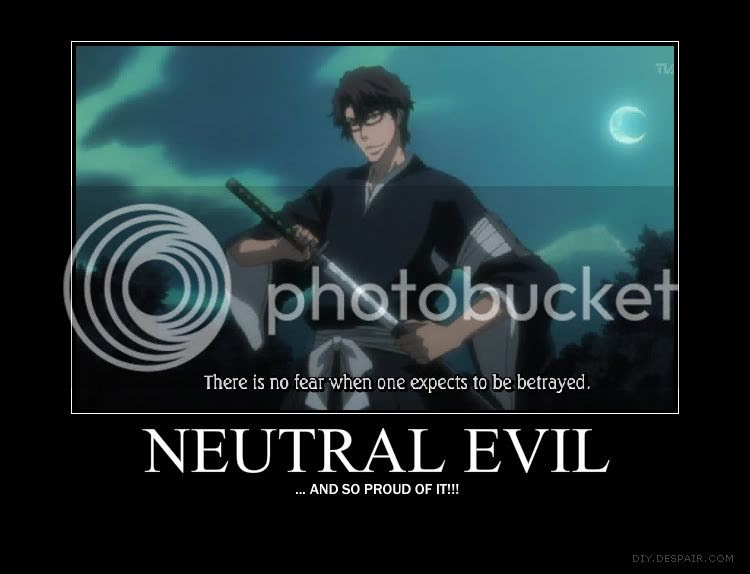 Here is where I think the game (and many games) falls down a bit. I don't blame the player in fact he was plying his alignment, and honestly I could nit pick his actions from the game for a page or two, but it would be counter to the point. He was doing what he thought he should do from a Character standpoint. Many games have no framework for the party, his character has no loyalty to the party, in fact it's only our third game, we have no group history. Worse he has no reason to want loyalty to the party, none. Would this little bit of tension be avoided if we had built the characters together as a party at inception? Had we known the whole “neutral evil” bit before hand, honestly we would have asked him to change it, but that's not exactly fair to the player either. The game does not account for the unspoken social contract of “we're the good guys” It's unspoken and he never picked up on it , it's not really his fault. Does the game give the party any mechanical reason to be cohesive unit? Anything besides the fact that there are combat specific roles that the games suggests each party have covered? (controller, defender, striker and so on.) If a mechanical benefit of having an actual party of characters was around would It slow down some of the instances of inter party strife that make for such great blog posts?
Great blog posts: Like this one !

To conclude the thought I want to reiterate I am not saying that any particular types or styles games can't be fun, they can. The fact I play them at least three times a week right now is as much proof of that as I need. I think however, that a lot of the famous RPG problems people like to bat around, like bogged down combat, GM railroading, repetitive fetch quests, and the like could be solved if the game system simply put the Characters mechanically front and center rather than the charter’s stat blocks.

As always thank you for reading , comments and shenanigans welcome!
Posted by Mark at 4:43:00 PM

Email ThisBlogThis!Share to TwitterShare to FacebookShare to Pinterest
Labels: Editorial