100 Random Things that just might lie in that inaccessible mountain valley the locals tell tales about. 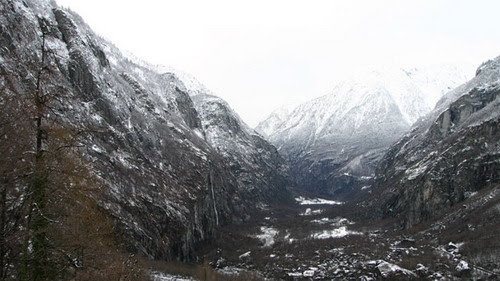 You have traveled far, the village is a welcome rest, they welcome you and your party with good spirits.

In the village at the foot of the high mountains the  locals tell stories around open pits of coals over which  heavily spiced meats an root vegetables are roasted on crooked sticks older than you are, blackened and slick with  many nights worth of  flame. On these nights the  stories are about the stars, long revered as ancestral spirits, and bout the  history of the village , the families that live there. One story catches your ear, a long tale that tells of a deep, narrow and nearly inaccessible valley some miles into the high mountains. The village elder peers through the  herbal cloud rising from his  ivory pipe, with dark eyes and broken teeth he tells of the valley, he tells of....

If none of the above options trip your trigger, go to this gentleman Deviant art page and something will. Any one of these pictures would be amazing to find in a hidden mountain valley.


Hope you enjoyed.
Thanks for reading
Comments welcome !
Posted by Mark at 3:52:00 PM