First off here are my notes form the game.
Everybody does it this way. Right?

I have to quickly touch on one of the  biggest troubles with online gaming. We're all adults ranging in age from 22 through over 40. We all have jobs and some of us get up ass early in the morning. We started the game at 8 pm, and it ran until midnight.  By the time we were done, we lost Otto and Chris to attrition (and perhaps to Mead), Neal was up against a time limit, Jay had to work in the morning, and I was dog tired, I feel comfortable saying Russ likely was to. However, there's just no other way to get everyone together this time of year.

I shouldn't have dragged the set up as much as I did, but we were having fun with the  messengers and the dwarves and the party coming together. It took to long and I had to make up for it on the back end, cutting allot of the actual Kramups Caves features as I went.

The game opened with  each character dealing with  the effects of a particularly cold and difficult late fall early winter. Very low temperatures tons of snow that sort of thing. In turn each character is visited by a messenger carrying a plea for help and the  promise of a reward that woudl appeal to them. Ric was promised treasure, The mages were promised an open library, the Paladins the  chance to save an awful lot of people.
The message held instructions to head to the  port of Everthaw and find a ship that will be waiting to sail north.

Neal had a good time with his Numenera character playing him as if he was from the  9th world, and  had no idea what the heck Everthaw is and rubbing against the logic of a fantasy world. It as good stuff as he entered Everthaw disguised as beggar and began rubbing shoulders with the other characters. 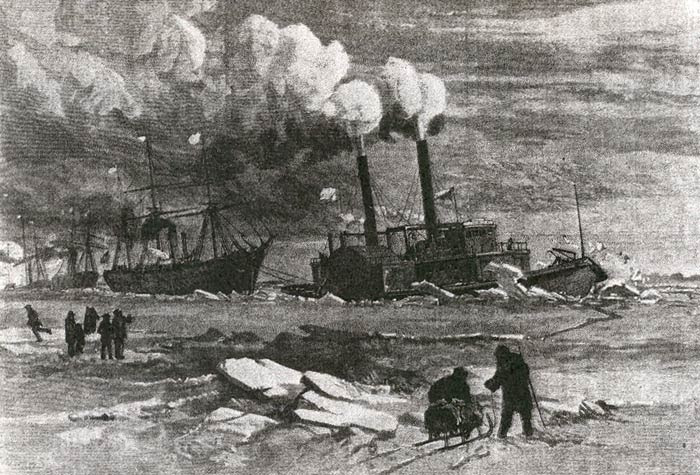 As the characters filter into town they can't help but notice the a large ship in the harbor is a double stacked steamer equipped as an ice breaker. First off ice breakers are uncommon and steamers even more so. The unusual ship painted bright red jumped out at everyone as their obvious destination.


It was Neal's Damascus who first ran into two members of the ships crew both Dwarves, one named Donner and the other named Dasher. Damascus dressed as a beggar engaged them while they were buying supplies for the ship and  even  gathered a couple of coins before being told to find a job.
Damascus for his part was quite confused having never seen "abhumans" of the  dwarven sort.

the other charters spent time pumping the local  innkeeper and  some  other  tradesmen for information about the  large ship in the harbor. The inn-keep took the  bribes offered by the  characters but actually had very little information other than, "ship from the  north , dwarf crew.," easiest gold that guy ever made.
After a time the  characters all gathered on the dock an were greeted by Donner which served as a kind of informal introduction. He explained that each  party member ha a custom room on the  boat including a dark below deck area for  Quizaris the Drow.
Ric recognized Damascus as the beggar from town and  simply nodded to him as a show of respect form one sketchy disguise guy to another.

The trip north was uneventful besides it being exceedingly cold and the ice breaker making though work through pack ice.
Here is one point I had an encounter planned for the trip, but the real world clock was ticking.

The party arrives at a far northern port village, with an incongruous temple built near the docks.
Here the  party meet Nicolas and the rest of his  Dwarf companions.  Nicolas is the  High priest of the  Cult of Saturnus, and  the man who called on these heroes to help him.  the cult has one responsibility  to maintain this village and temple so that yearly a ritual can be held that calls spring into the  world. The ritual must be  performed by children  younger than 13, and is held in this remote location as to protect it from the  evils of the  world. It's isolation  insures that the  ritual will persist. But this year the ice elves have summoned a demon known only as the Krampus, who has stolen the children away in an attempt to ensure an everlasting  winter.
Nicolas also gave the advice that The Krampus may be weak to silver, something I thought at the time no one picked up on, but I learned latter they did.

This would normally leed to characters tracking and  finding and investigating. Again  clock was ticking.

the party traveled through the  village with  three dwarf guides Donner "the steady one" Dasher "the  inpatient one" and Blitzen "the bezerker."

Quizaris took time to stop and borrow clothing from a distraught family with story that it would assist him in  tracking down their daughter. He then proceeds to raise a skeleton form the  local grave yard and attempt to  disguise the skeleton as a child. The rest of the party balks , the paladins are luckily  ahead with the dwarves, things get strange. Damascus makes an attempt to magically  assist in the disguise effort when Neal rolls of 1 which in Numenera allows me a GM intrusion. I told them the Skeleton Grows to  8 foot tall destroying any chance to disguise it and ripping the borrowed coat to shreds, it also alerts the rest of the party  to in't presence. Chris's Paladin jumps to kill the thing, but  Quizaris uses some quick glamour and  illusion to convince ever on that this  sin against nature is not what it appears and  they move on. Had this not been a one off  for fun adventure I'm sure that whole fiasco would have degenerated into a character on character blood letting of some sort.

Again we fast forward a bit and the party arrives at the cave of Krampus the entrance of which is  guarded by two ice elves riding polar bears. The wizards hang back with the big ass skeleton as not to be seen while  the  paladins and the dwarves sneak forward. Rick being snaky moves forward attempting to get closer under the cover of an illusion cast by Damascus.

A quick fight broke out .

here I have to say something about Ric and Phase abandon. Jay rolled about as badly as a person can roll last night, and in D&D you might be able to get by, but in Phase you get screwed hard when the dice don't go your way.
In this instance he managed to jump at both elves with a sneak attack killing one elf  outright, but ending up only  punching the other and getting in a fist fight on the back of now out of control polar bear.

Reginald  killed off the second elf I think with a 2nd edition 2 handed sword strike to the face.

The party collected some potions from the dead elves, and then promptly fed one to Dasher. I used the chart from page 97 in the Narcosa PDF and good old dash promptly go high and went blind for two days. Good going. They tied him to Donner and soldiered on.

This is about when things get fuzzy for me. We lost Chris to the rules of his household and soon after Otto succumbed to his long hours at work, and some good mead.

Once in the ice caves another fight with ice elves broke out.

Mixing the three RPG systems still involved in the game worked smoothly. I had to remember to have Neal make dodge roles ala Cipher system and have Russ tell me what AC he hit ala THAC0, but beyond that it was pretty smooth.

Jay rolled badly the  whole fight which nullified the extreme narrative control that phase allows. I mean he could have narrated any darn thing he wanted on  successes and I would have had to  adapted to what he said, which would have complicated the merging of systems but not too much.

The next room featured a summoning circle made of iron dust which Regi  ruined as soon as he saw it which drew then attention of the  Krampus himself (in the name of time again.) 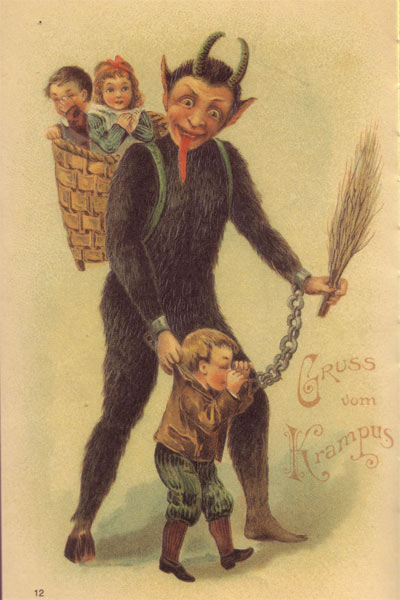 Krampus loosed five prepubescent mind controlled children clumsily wielding swords on the party. This left the party with a  problem, none of them wanted to fight eh children, Reignald the paladin in fact could have no part in it. So  Regi bum-rushed through them to take the fight to the demon.

Ric used a sleep gas bomb to knock out two of the kids and the blind Dasher(another crappy roll.) Ric made it his mission to  gather necklaces off the children which he figured must be controlling them.
Donner and Blitzen were reduced to parrying clumsy sword strikes.
Damascus Fired magic at the  Krampus then moved in with his energy sword for close combat.


Mechanically  the  fight was interesting:

So There it is.
The Krampus defeated for another year.

The only thrift I gave using the different systems is the chart I drew on the  left hand side of my notes which I used to normalize everyone's damage to the  number of ht points I was giving monsters.
Neal was only ever going to do 9 damage tops which is sweet in Numenera. Ric could have hoped on a fantastic role to do 7 or 8 damage with one action. Comparatively Regi could have done 18+4 with his sword vs a large foe. I normalized the damaged by giving he  Phase and the Cipher players a damage boost based on what they rolled within their own systems. If Ric rolled 3 damage I would have counted it as 6 hp worth of damage. It was nothing precise or scientific but it seemed to work in the context of the adventure.

Please leave any questions or comments in the  wicker basket of stolen children below.