Over my past few posts I have written about  various aspects of the AAIE game , how I came up with them and what my intentions were when I wrote them. Any long time reader of this blog (if you are I'm so so sorry) might have noticed that much of AAIE runs counter to the other designs I have written about.

The most obvious area that AAIE is different is in the area of player control over the creation of their own characters. Having completely random characters can be both freeing  and frustrating. There's no such thing as a lovingly crafted AAIE character. There's no such thing as an AAIE character that completely matches the players vision. In fact the game is set up in a way that some characters are barely even viable adventurers.

For me the lack of player control created a gap in the original game. After giving it some thought I decided that I had to write a second section that would give the players something to call their own. Otherwise AAIE would just be a meat grinder with  characters being rolled up and quickly dying, only to be replaced with another faceless slob. While that formula might be fun for a one off game, I never felt it would have any legs as a long term RPG.

My solution was "AAIE The Town."
The town takes up the second half of the game document and begins with a description of the starting Inn. The inn is that ubiquitous place that adventurers in RPG's meet and where rumors are spread about deeply buried treasures. It's a cliche. As a gaming cliche I love it, it fits AAIE's motto of "Leave no Cliche Behind" perfectly. The town starts as just this initial inn located at a crossroads. Adventure locations get placed near enough for the players to travel to from the inn, but not close enough for the  inn to be threatened by whatever the  players stir up.

The players can use treasure they find on their adventures to buy buildings and services for the town  after each adventure. It works on the theory that the returning adventures are going to spend gold in the town , and that gold will attract more people to the area. Historically anywhere in the world that wealth can be pulled form the  ground, it has brought sudden development. Think the California gold rush, silver rushes as far back as the mines of Laurion helping to fuel the wealth of  Athens, or more recently the  1990's diamond rushes in northwest Canada. The logical leap that needs to be made here is that the players spend money  to buy and upgrade buildings as a representation of their economic impact on the area, not always as a direct purchase by the characters. Characters go into some god forsaken cave, they kill a multi legged tortoise god, and  steal his giant emerald eyes. Word gets out and a blacksmith and her family move to the area. Then perhaps some farms sprout up in the recently cleared woods. An apothecary shows up. So on, so forth.

The town is a players way of moving towards what they want their future AAIE characters to be
better at or have access to. Each addition to the town opens up new options for a players current AAIE character and expands the options of all future characters played in the same game. A level 1 apothecary can provide healing potions. That service will always be there even if the characters who paid for it are long dead. A player wants access to more weapon skills? Upgrade the inn so a fighting trainer moves in. Want to expand the abilities of Wizards? Build a school.


Some of the town options get a bit detailed. Additions like the Furrier that will pay for the skins of exotic animals add to the adventures available to players. The  Kobold clan that can be attracted to the town which will provide the labor needed to build roads and  mine raw materials, the effects of  which are to generate income form the town out side of the payers actions. Things like the Seedy Pub and the caravan add new products and even new playable races for the  players to experiment with. Moreover when a player buys a building they have the option of retiring their current AAIE character and making that character the owner of said business and  thus a town NPC.

It is important to  remember the town represents permanent additions to the game that the players can call their own. A player may remember that they bought the black smith shop. When they buy an upgraded sword the player knows that the only reason they have that upgrade is through their own actions. The only time a GM may add a building or service to the town his or herself is if the players decide to buy a bank for the town. At that point a pool of gold is created that the GM can spend between games for upgrades to the town as they see fit. (Dead character's gold goes into the bank,  from which the players or the GM can make withdraws to buy town items. Before the bank is bought a dead character's gold simply dies with them.)

The town is a tangible measure of the  players activities in the game session to session. It gives the, an anchor in the other wise mad random  AAIE world. The recurring town NPC's become well known, and even well liked by players. 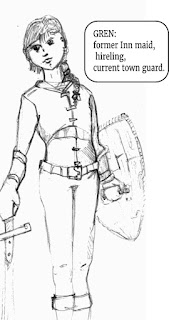 One of my favorite NPCs from our game is Gren. Gren and her brother Ott were stable hands at the
inn who the  players hired as retainers for one adventure.  It did not take very long for the adventure to go bad and characters started dying. Ott failed a morale check early on and ran home.  Gren on the other hand passed all of her checks with  flying colors. Not only that she never got killed, which is amazing in it's own right. When the party returned to the Inn Ott swore he would never adventure again, but Gren had developed a taste for it. When the party bought a barracks for the town so they could hire better retainers, naturally Gren signed up to be a town guard. When the head town guard was hired by the party as a fighter retainer and met a horrible end at the claws of some random beast, naturally Green  stepped up and became the town's head-guard. At this point I don't think she would go on an adventure with the players, she is entrenched in the town, and doesn't need to adventure. New characters coming through are just more  new comers that she needs to keep an eye on. It's great little story and it all happened very naturally through  the  players interacting with the town.

Like all things the town comes at a price. The town represents a measurable jump in the amount of bookkeeping the GM must to to play AAIE. I would argue that even a full fledged AAIE town with multiple adventure sights, plot lines,NPCs, and buildings is still less prep than a full blow game of D&D. My reasoning being that an AAIE town grows one bit at a time in a natural fashion so the GM never has to do it all at once. I could be wrong, millage may vary and all that. The bulk of the pre game work is  stocking  stores with  new items and perhaps figuring some income for the town if that's something the town is capable of.

There will be more on the town latter on. Until then here is the graveyard entry for our current games town.
Ohhhh Darwin we hardly knew ye...
Thanks for reading.
-Mark