Just boosting the signal of an interesting product.

Seven years of Fantasy Weather Volume 1 Medieval England (by Written Oakes Spalding) has been bouncing around my G+ and social media Feed this week.

The  pitch from Drive through is as follows:


Each twelve-hour day or evening entry includes information on temperature (in Celcius and Fahrenheit) weather events - fog, thunderstorm, blizzard, etc. - amount of rainfall/snowfall, occurrence or possibility of lightning, wind speed, wind direction, phases of the moon, effect on movement rates and chance of getting lost. It's an almanac for the fantasy gamer. No more annoying die rolling or consulting an app or online program to generate a random or patternless result. With FANTASY WEATHER you can see all of it at a glance

This is one of those things I never knew I needed. An Idea which out of the blue that makes me think, "Damn, I wish I thought of that." As such I wanted to  to pass it along, with a thumbs up. Furthermore it all looks well presented in a familiar / classic old school format that is user friendly and easy to read. The effort to compile this work, and format it with such an obvious eye towards the look and feel of  "Original Old School" products seems worth more than the asking price of $7.00 U.S.

Lastly there's promise of more Volumes of  "Fantasy Weather" which  makes me think how cool would it be to  print them all (once they are done)  into a binder for  reference as needed.

If it's the kind of thing you could use at your table give it a look.

Disclaimer: You have read this before. I don't know the author of this product, I did not receive this product, I don't do "Affiliate" links on this blog as of this writing.
Posted by Mark at 3:00:00 PM No comments:

The Anatomy of: AAIE Dice Mechanics.

Posting this to answer some questions that have come up lately , specifically about  what are the "standard" difficulties in AAIE, which was asked at Metatopia this year of our lord 2017.
I figured the best way to answer that question would be to  disgorge the die system in all it's fetid glory.

Try not to fall asleep this isn't the most exciting game stuff post ever..

AAIE is built around a concept of Bell Curves vs A straight distribution.
When I started this game I ripped the die mechanic form my table top skirmish game lovingly known as "The Block Game." Way back when I wrote the Block Game I decided that I didn't want a straight distribution of 5% per vlue that 1D20 provides. I wanted something that offered more options. More ways that the game could manipulate the chance of a characters attacks being successful. IN that effort I started looking at  the distributions of rolling more than one die with one being designated an "Effect Die" to  determine  attack damage. I figured the success chances back then, when AAIE came around I just used the same methods..

Hold your breath lets do this:

At its base  the game is this: For any normal action the player rolls 3D20 and looks at the  middle value versus a difficulty to  determine success.

The  Game master lowers the  difficulty of a task based on the attribute (if any) the character can use during the task. If lifting a log's difficulty is 11 and the  players brawn is  4 the  final difficulty  will be 7. For the example character an average task is actually pretty easy.

Question: "Why does the  GM do subtraction? That seems strange and  kind of shitty."

Well yes it is.  That brings us to the straight distribution portion of this  dance.
The simple Answer is  if the  Difficulty falls to 1 or below  the  player doesn't have to roll to succeed they just do.

The complex answer involves the "Effect Die." The effect die is any one of your three D20 designated at the beginning of the game which determines how successful a successful roll is and how horrid a failed roll is.

Remember the question a paragraph or two above?
If the difficulty is 1 or less the player only needs to roll the effect die. They automatically succeed but  they still need to determine how strong a success they have scored.

In other words in it's mathematically in the players best interest to get the  difficulty down to  or less if they can.

Here is any dice figuring the  Advantage  distribution: 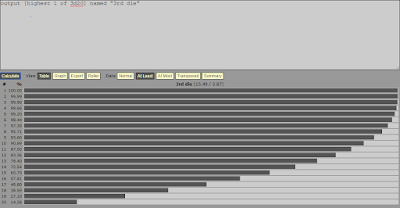 Here is the  Normal roll distribution: 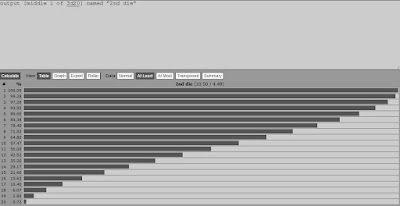 Here is the Disadvantage Roll Distribution. 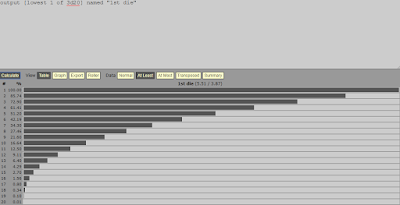 At the same time I'll look at what the chances of rolling a failure versus an 11 difficulty and also roll a 1 on a separate D20 (which is what is in effect happening when you designate one of the D20's as the "effect die."

This tells me that if I have Advantage I have a 20.84% chance to  be successful and score a perk.

On the  other side of the  scale if I have Disadvantage I have a 4.38% chance of  failing vs a difficulty of 11 and also  rolling a 1 on the effect die...probably causing my character to  explode in a mushroom cloud of  feathers and  bile.

To wrap this up nicely the game die mechanic can be said to revolve around the base chances and how the player's actions / characters attributes stack up against challenges in the narrative environment.

So that's that a look under to hood at how how the  dice in AAIE shake out. (HAr HAr)
I'm sure there have been some mistakes along the way.. I'm no statistician, Not even close. However if there are mistakes, I'm going to have to let them be because I built the mechanic on this foundation a long time ago.


All calculations done with  "Any Dice" found here on the web. It's a great tool.