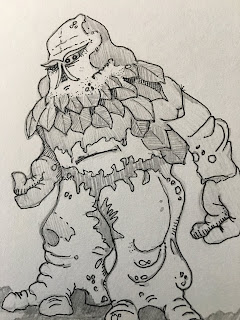 Physical:
Size Small: Less than 4.5 feet tall, usually very broad shouldered. The do not have necks and can not turn their heads.
Coloration: molted greens and browns.
Skin is leathery with leaf like flaps which vary in color from dark black to bright green.
Eyes range from dark black to deep red with have two retinas each.
Thick arms end in broad hands each with two thick digits.
Trunk like legs end in flat three toed feat.
Speed: 30 feet per round walking, They may sprint at 50 feet per round but only in bursts of a single round with a "rest round" in between. They may climb vegetation at 30 feet per round vertically or horizontally.
They are simply not slowed or effected by difficult woodland terrain. The move very natural through forests.
Hit points / Health: Depending on your system of choice. Use the hit point statistics given for  Dwarves, or their nearest analog.
Difficulty to hit: Again depends highly on your system, again use armor statistics for dwarves or their nearest analog.

Senses:
Sight: They can see both  normal light and heat.
Thier vision is good out to about 30 feet. From 30 to  90 feet they can only see movement
They have infravison at a range of 60 feet in front of them.
The also see roughly twice as many colors as a human, making  normal modes of camouflage in forest environments less effective against them. (in fifth ed use advantage on perception checks in wooded environments, in other games use a +5 bonus to see camouflaged targets)
Wind sense: they have sensory organs above their eyes which look like  curled eye brows, theses organs are very sensitive to changes in the  direction and  force of the air. This makes the creatures difficult to surprise. This gives them an odd sort of "hearing" where in they can sense noise from  air vibrations out to  20 feet in a  cone shaped area emanating directly in their front.
Hearing: their hearing is extremely limited to only subsonic sounds. The can senses the notice of heavy  animals or other disturbances in the forest, often before a creature with ore human type hearing can. Mosstaro will often put their mouth organs to the ground and make very deep bellowing calls that other Mosstaro can  "hear" from miles away.
Reproduction:
When a mosstaro dies it's body leaves behind several 1d6 golf ball sized spores. These spores grow in the decomposing litter of the recently passed  Mosstaro, budding into small Mosstaro "sporlings". These small creatures will  feed off moss and lichen. For this reason  when a Mosstaro feels its health waning it will oftne find a dark , damp , mossy place to  die in order to best support it's next generation. Once large enough (about 6 months)  to respond to calls from nearby adult mostarro tribes. The young Mosstaro will move towards which ever adult calls they hear first and will join that tribe upon finding an adult mosstaro. An adult which  finds a sporling  will become its mentor and protector. Many Mosstaro young fall prey to predication  during this  early period. If an adult mosstaro finds spores in the forest they will make camp where they are found and protect them  doggedly until the sporlings grow large enough to travel. These "protection camps" are the  only semi-permanent Mosstaro camps.

Mental / Social:
Mosstaro are nocturnal, and often found alone.
They live in tribal societies made up of up to  20 individuals per tribe. Due to their subsonic methods of communication their "tribes" might spend many weeks at a time living fair distances apart. Each tribe develops their own individual calls and  bellows which other tribes respect and do not duplicate. Due to the wide dispersion of individual tribe members it is not uncommon for  tribe territories to over lap. Mosstaro have an intricate set of  rules and treaties among their tribes which determine exactly which tribe has rights to which resources in any given area. These treaties can be centuries old and almost innate knowledge to the mosstaro. A human let in on the rules would find them unnecessarily intricate, obtuse, and  cumbersome.
The rank of individuals can be told by the  overall brightness of their "foliage" like skin. It can be assumed that the more color sensitive vision of Mosstaro can pick out even more information for the markings of another  individual, though that is impossible for us to know.
ON rare occasions whole tribes or even multiple tribes will gather in particularly resource rich areas and discuss the  needs of their tribes and set out even more treaties and rules.  Thees meetings are rare but are also the best time a human party  might have of  brokering any kind of assistance from the mosstaro.
Communicating with Mosstarow:
Tribal leaders sometimes know an equivalent of the "know language" about a 1 in 6 chance. These leaders will always be used and  envoys to other races and will often be adorned with  intricate stone and  feather necklaces.
Otherwise communication  may  be achieved through pictographs drawn in dirt or with charcoal or  through barter. Some simple hand signals may also  be  effective though air movements caused by hand signals might confuse a Mosstaro. Verbal communication will be beyond human sensory range, and the air sensing communication of Mosstaro is completely beyond normal human abilities.

Intelligence:
Mosstarow are highly intelligent in a highly  non-human way. They communicate complex ideas with  waves of their hands, and  deep subsonic rumbles. The innately know the forest and it's rules far better than any human, often doing  complex survival and or animal handling actions with a practiced ease which  rivals the finest human efforts. They are deeply wise and often consider the possible consequences of actions several level more deeply than other creatures. If a deal can be brokered with the  mosstaro they will follow it t the letter, leaving no room for obtuse interpretations. For example "Show us to the  water fall" might end up with your guide taking a route that charters would have a very difficult time following. While "show us a route we can use to get to the water fall" might yield better results. As guides they are unrivaled often cutting travel times by half or more, however they move through the forest with such ease that human parties will often have difficulty keeping up in difficult terrain.

Many  high ranking mosstaro individuals have access to spells from the druid sphere up to level 3. These spells vary widely among individuals, and can be seen  as innate "spell like" abilities not memorized spells. It seems that they may cast up to thee level of druid spells per day, meaning one third level spell, three first level spells for  any other combination of one second level spell and one first level spell.

Combat:
They are extremely slow to violence , and will disappear into the forest if provoked. Knowing fighting is often far more destructive  than productive for their race. They use their knowledge of the forests and their natural camouflage to best effect. These features make them extremely difficult to chase or track, and they will often lead a pursuer into the  deepest most dangerous areas of a forest, then let nature do the fighting for them. A party might be tracking a Mosstaro only to find them selves face to face with a cave bear wile standing in swampy terrain.
If forced to fight they may attack twice per round. using their very strong fore limbs, for moderate damage. Rarely they will employ blow guns with exceptional accuracy, adding sleep inducing poison for effect.  Another favorite tactic is to use spore filled mushrooms like grenades. The spores can have several effects from vertigo, rash inducing, or simply to obscure a targets vision.  Mosstaro do not fight to kill rather they fight for the opportunity to  retreat.

They are extremely slow to violence , and will disappear into the forest if provoked. Knowing fighting is often far more destructive  than productive for their race. They use their knowledge of the forests and their natural camouflage to best effect. These features make them extremely difficult to chase or track, and they will often lead a pursuer into the  deepest most dangerous areas of a forest, then let nature do the fighting for them. A party might be tracking a Mosstaro only to find them selves face to face with a cave bear wile standing in extremely swampy terrain.

Rumors about the Mosstaro.
(these may or may not be true)

Thank you  for reading:
-Mark

Email ThisBlogThis!Share to TwitterShare to FacebookShare to Pinterest
Labels: monsters