we play on roll 20 on Friday nights, starting around 7 or 8 pm then we go until about 11 pm . That's not a ton of time. It's also at the end of the work week and nobody has a ton of bandwidth left.
So far we have had two "lets get comfortable with the system games" GURPS has a reputation for being  complicated. Honestly I bought into that having only read second edition GURPS. I feel that game feel was a bit of a mess, and left a bad taste in my mouth. The fourth edition is much more straight forward and even more importantly laid out in a much more user friendly fashion.

Other than those things the game has been  running fine. A bit of confusion the  first time a shot gun came into play, nothing that a quick look up didn't solve.
GURPS as a system is incredibly simple. Find the  skill level roll under it on 3D6 for success. That's basically it. Any thing that stumps a new GM can default back to that in a pinch.
The complexity comes from the  layers of skills perks and what not the game uses to take into account just about everything. IN the end however that all jsut modifying the skill so it's still not really that complicated. Just modifiers based on situation .. bingo ... no big deal.

What GURPS 4th feels like to me is if Tom Moldvay's Basic D&D had never been replaced. That it had gone through 36 odd years of expansion, revision, and honing. I know it's not he same but that's how I see it.A very old style game that has been sharpened, tumbled, buffed, tested, edited, and  revised until it's about as refined as it's form allows.


Here is a clip of our current roll 20 set up and game map. 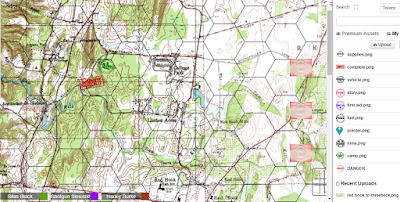 I made a set of 9 graphical "stamps" that can be placed on the map as Tokens. With them we can keep journal entries at locations. Later we can go back an reference what happened, and who we might have met at each "stamped" location.
one stamp is a blue GPS like marker. It's used at the end of each game to mark where the characters were heading when we left off.

The actual map is from the USGS survey. There're stitched together collections of the USGS topographic maps arranged by county and state as gathered by Cornell University.
The maps are amazing, a GREAT public resource and deeply interesting on their own merits. Moreover the maps work for my needs. The only issue is that the whole maps are too large for Roll 20. I have to chop them up into the areas I need. It's not that big a deal. I have learned quickly that scaling them correctly is difficult and time consuming. After this first map, that hex grid is likely going away.

The players have already plotted travel on roads or thorough flat open ground when they need to be fast. Have had to ford a flooded creek with a washed out bridge, and have enjoyed getting muddy in a swampy area. The maps are sweet, and add much to the feel of the game. 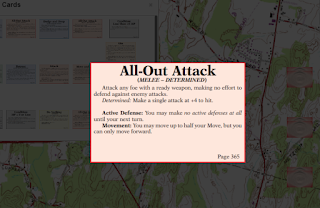 The card decks you see on the  right of the map are decks made of the GURPS combat cards. I cut them up using gimp and  made a roll 20 card out of each one.
I gave each player a deck so that during combat they can look over the cards as reminders of what their action options are, and the rules attached to those actions.
So far it has been handy but not often used. I think in the middle of play we kind of forget the cards are there.

So that's where we are at with  GURPS. Perhaps next week I'll have a post about the in game story. I think the next game will be the  one where the players are going to finally get involved in some deeper story-line style things.

As long as I can get motivated to set it up.
That's the crust of it all.
Preparation.

Thanks for reading
-Mark.

Email ThisBlogThis!Share to TwitterShare to FacebookShare to Pinterest
Labels: G.U.R.P.S.